a bouquet of sharpened pencils.

The year was 1998. I was a brace-faced sixth grader busy earning my gold medal in awkwardness, when it happened. A spunky little actress in a minor film known as "You've Got Mail" whimsically described the most blissful nugget of goodness I could have ever imagined: a bouquet of sharpened pencils. Meg Ryan knows me. Like she really knows me. She knows that nothing makes my heart go pitter-patter as much as a bouquet of sharpened pencils. Nothing. But then, I ran into a pint-sized setback. Six year olds.

Unfortunately, six year olds see pencils as nothing more than a chew toy. Maybe some of the time, we can use a pencil as a scribe's utensil, but 99.9% of the time, it's a chew toy. So how am I, the lover of all things whimsically Meg Ryan, supposed to create little bouquets of sharpened chew toys? I had to set up a system for my munchkins so that they could transform their chew toys into pencils.

As I researched systems for corralling dull pencils and making sharpened pencils available to everyone whenever they needed one, I found the most PINspiration in this system by Andi over at Pencils, Glue, and Tying Shoes (well hello, adorable blog name!): 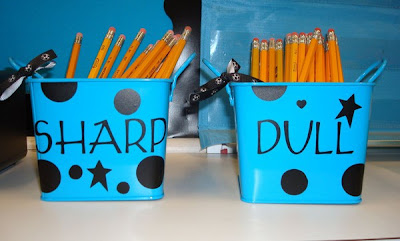 Talk about simplistic genius! I loved the idea that all of the dull pencils would be together in one bucket. In the past, anytime my kids needed their pencils sharpened, they either brought the pencils to me (nevermind that I'm just standing here delivering the most mind-boggling lesson EVER) so that I could sharpen them, or they would pop up whenever it suited their fancy, and proceed to allow the pencil sharpener to devour their entire pencil.

So last summer, I snagged two mini metal pails in the Target dollar aisle and (shocker) whipped up some labels! 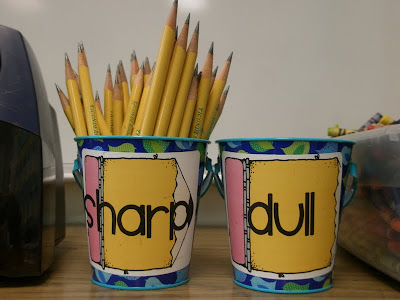 Then, Santa got sick of being in a parka, so he brought me a little gifty in the middle of July in Texas, y'all: 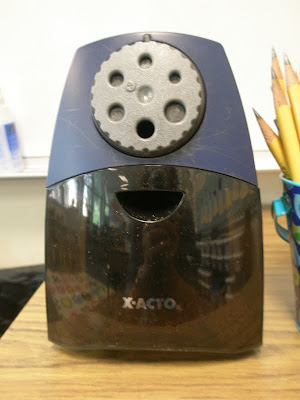 Y'all. Meg Ryan might have just said her infamous line straight to my face. Talk about my heart skipping a beat. Yes, it's just a pencil sharpener but this is, by far, the best.pencil.sharpener.EVER. I don't know if you can see it, but right above the grey dial, there's a little light bulb that turns on as soon as a pencil is completely sharp. So, rather than kids leaving their pencils in the sharpener until the dinosaurs come back to life, as soon as they see the light, they know their pencil is sharp. I die.

Our pencil buckets and sharpener sit on a backwards-facing desk at the front of our room right next to our orphaned crayons. 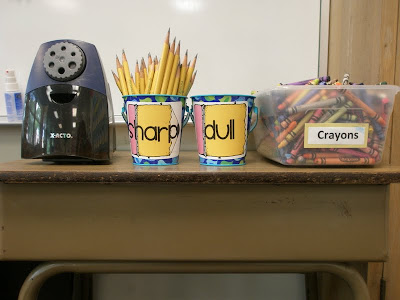 Now, at the end of the day, one of our classroom jobs is for a helper to sharpen all of the "dull" pencils and refill our "sharp" pencil bucket. Since we have the Christian Louboutin of pencil sharpeners now, it's an easy peasy task and no pencils have to meet their Maker in the depths of the sharpening cogs.

How do y'all manage your bouquets of sharpened pencils? 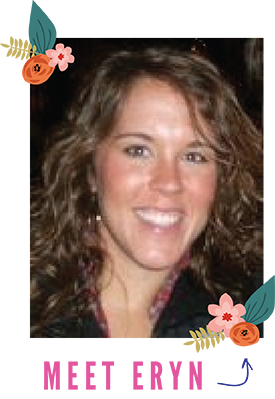